Mud, moss and more, my residency at the Centre for Alternative Techology 2015-'16
Playing with materials bound to the earth lifts us out of the commonplace and into a world reimagined. Art has the ability to re-enchant our consciousness with the world when the facts and figures of climate change leave us numb.

My art and climate change journey started 8 years ago when I began to explore natural, low impact materials and processes in my artistic practice. Through the materials I was experimenting with, namely golden yellow Dartmoor beeswax, I began to unravel the ecological mysteries surrounding the decline of the honeybee. This led seamlessly on to exploring other local and global environmental issues that affect us all in both subtle and devastating ways.

In the first week of my residency at the Centre for Alternative Technology, I realised how surface level my knowledge was about global climate change, this was going to be a sharp learning curve from the ground up. Thankfully my residency was connected with CAT’s education department, so alongside many groups of school kids I spent my first few months eagerly absorbing the wealth of knowledge that these enthusiastic ladies have to share. 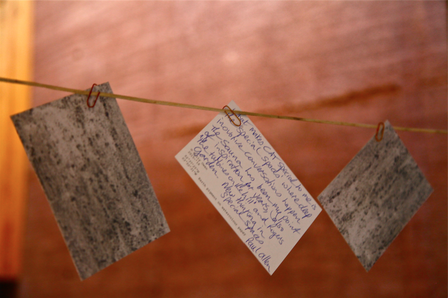 Our CAT, digital prints of earth pigments collected at the Centre for Alternative Tecnology, handwritten stories from staff about what makes CAT special. 2016
As the new school year started and the months before COP21 in Paris began to slip away it was then that I realised the significance of the timing of my residency.
Two years prior to my CAT journey I began working with digital artist Kristina Pulejkova on a multi-media project entitled Switching Heads-sound mapping the Arctic. The project took us to a community deep within the Arctic Circle where we worked alongside local people to collect the sights, sounds and stories from one of the most endangered environments on earth. We were invited to take the resulting film to the art and culture festival ArtCOP21 that ran in conjunction with COP21 in Paris. As our anticipation of this important global event grew, so did the atmosphere at CAT.
Embracing the opportunity to delve into the political world that CAT’s Zero Carbon Britain programme resides in and encouraged by the active work of groups such as Reclaim the Power Kristina and I hurtled towards COP21 fully fuelled with knowledge and the sense of people power.
I feel proud and humbled to have had the opportunity to play an active role in the events surrounding COP21, made even more poignant by the timing of my connection to CAT.

Looking out through withered leaves over the sparse winter beds of CAT’s central polytunnel Switching Heads (Llwyngwern slate) waits for spring. I constructed the life size head from slither thin shards of CAT quarry slate that now blends organically into its surroundings ready to be awakened later in the year when Kristina and I come back to CAT. We will be filming the second film in our on-going series Switching Heads – sound mapping the […] that explores climate change through the voices of people who live and work in places of environmental significance. Our current films and the adventures we had making them can be seen on our website www.switching-heads.com. 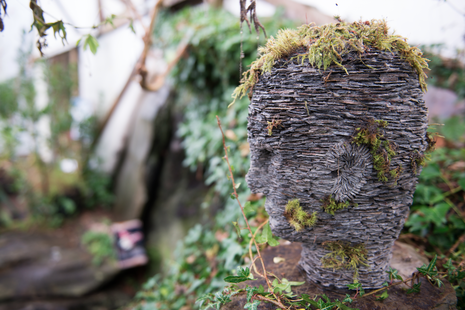 Switching Heads (Llwyngwern slate). Llwyngwern slate shards and moss. 60x50x50cm. 2016
Food is a subject that everyone loves to talk about but one that can be quite controversial when doing it sustainably. Allotment brings together the patterns that appear astonishingly regularly in natural forms with organic, site-specific materials. Seeds, from head gardener Roger Mclennan’s historic seed bank, oscillate out from the center of a disc painted in Llwyngwern slate pigment. Allotment spans a UK food-growing year challenging food production, food miles and waste and encouraging locally grown, organic, seasonal produce that can give extra enjoyment to the food we eat and share.

My Earth explores CAT through the infinite colours, tones and textures under our feet. 32 different postcard sized swatches painted with mud pigments map the site, each accompanied by an individual story of discovery.  It is a snapshot into my 7 months at CAT, and my journey and the re-enchantment of finding beauty in the mundane and overlooked. Alongside this work I invited the people that make up CAT’s passionate, skilled and creative community to write their own story about why CAT is so important to them. The stories that were shared created a colourful, unique and positive patchwork of individual journeys that collectively form a community like no other.

The months that I have spent living and working in this reclaimed Welsh slate quarry amongst the ancient history, the realised dreams and the shared futures has focused my creativity in ways unimagined. As my art and climate change journey continues it has been enriched with a deeper focus for an alternative way of life, imagined through the arts and made possible by all of us.